How a CPA Firm Built a More Scalable Business (and empowered their team!) by Centralizing Their Marketing Efforts in HubSpot.

How we helped this company monetize their blog traffic.

Quite simply, the company’s search ad strategy was costing them greatly. The lack of revenue generated by their search ads made it difficult to justify paid ads as part of its expansion strategy.

When the company approached us, its “cost to revenue” ratio from paid ads was 10:1; meaning that for every $10 spent on ads, the company made a paltry $1 in revenue. A negative ratio like this is clearly unsustainable, especially for a company intent on expansion.

The main reason for the breakdown was the company’s use of a popular sales tactic in this industry: giving shoppers a free product sample with only a small shipping fee as payment. In this particular case, the company bid on “adult incontinence sample products” search keywords and their ads for a free sample appeared at the top of the search page.

While this offer was popular and generated quite a few conversions, the conversions were low-value, generating very little revenue and driving up the actual cost of each sale.

Closing the Gap in Search Ads

When we began this project, our first main priority was to help the client close the gap between ad spend and revenue.

While the company’s ads were producing a fair amount of transactions, they were mostly low-dollar amounts. Immediately, we determined that in order to close the gap between ad spend and ad revenue, we needed to end the sample strategy.

So, to tighten up the company’s search ad strategy, we first focused on producing more high-dollar transactions with the ads by driving more interaction with the company’s core offer. We ended the bidding on “sample-related” search keywords and removed the option for free samples altogether from the landing page.

A New Addition to Their Paid Ad Strategy

During the course of our work, we suggested a new strategy for the client: Google Shopping.

When advertising physical products online, visual elements are known to drive significantly more interaction, or clicks, than plain text ads. Browsers are more likely to click on a product they can see versus one they can only read about. With Google Shopping, we were able to introduce new, attractive visual elements to our client’s paid ad strategy.

As an introduction to Google Shopping Ads for the company, we grouped the company’s top 5 performing SKUs on Amazon into a Shopping campaign and started them off with a small spending budget.

Search Ads: The change in strategy closes the gap

Online advertising, like most digital marketing, takes time and long-term investment to see real growth. Over the course of several months, we helped the company realize considerable growth to their search ad strategy.

When we began implementation, the company had a significant ad spend budget per month, but only made back about $1 for every $10 it spent. Another way to say that is: for every $10 they spent, they lost $9.

Over the course of several months, we conducted tests to improve the paid advertising strategy and, as a result; the company reached monthly break-even with their Search Ads, while increasing their spend.

Our initial goal to break-even was met but, because break-even wasn’t our ultimate goal, our next step was to continue evolving the strategy to grow revenue to generate ROI. 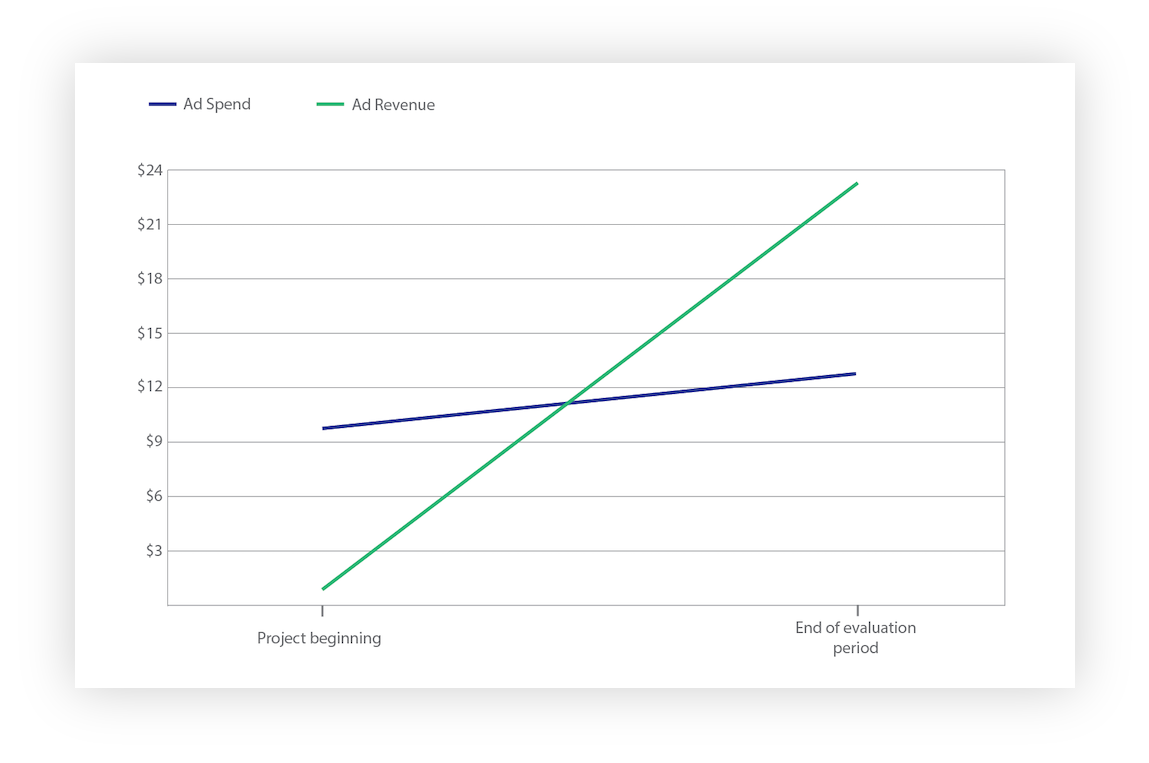 Less than a year ago, the company had a failing ad strategy that only earned them $1 for every $10 they spent on paid ads.

Now, overall, the company generates 23x more revenue from it’s ad strategy than it did when we began.

With a successful ad strategy that makes them money, the company is moving steadily toward it’s expansion and revenue goals.

Our work of refocusing the company’s search ad strategy while adding Google Shopping to the mix shows that, when you know where to look, small changes can make a big impact on the bottom line. Even more importantly, this data signals a step in the right direction for our client, who is now primed for success in their new market.

lets have a conversation

Looking for results like these? Request a free consult. We'll spend 20 minutes together to discover if we can help.